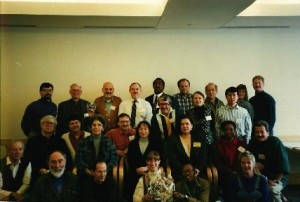 Participants of the 1995 East St. Louis Syntegration on Old Man River City, attended by State Rep. Wyvetter Younge (center row, third from left). The event was organized by Dr. Bill Perk, who studied under design scientist Bucky Fuller, who along with Rep. Younge and dancer-humanitarian Katherine Dunham, conceived of Old Man River City. Members of CESJ Rowland and Dawn Brohawn (immediately right) introduced the concept of the for-profit, citizen-owned Community Investment Corporation, which Rep. Younge introduced in a bill to the Illinois House of Representatives. The bill passed 114-0, but Rep. Younge passed away soon after and the bill never went forward.

RT @Something203: This day more than any other it is important to set aside our cynicism and take heart in our democratic tradition. I am…
- Tuesday Nov 3 - 4:43pm