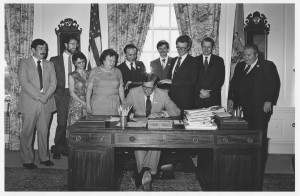 Standing behind Governor duPont, from left to right:

Luis Granados III, Washington Counsel of the ESOP Association of America, co-authored report on ESOP for Norman Kurland & Associates for State of Delware

RT @ownorbeowned: @CESJ_org Thoughts on Juneteenth 2020: Without capital ownership, we won’t have power. Without power, we won’t have just…
- Friday Jun 19 - 9:44pm